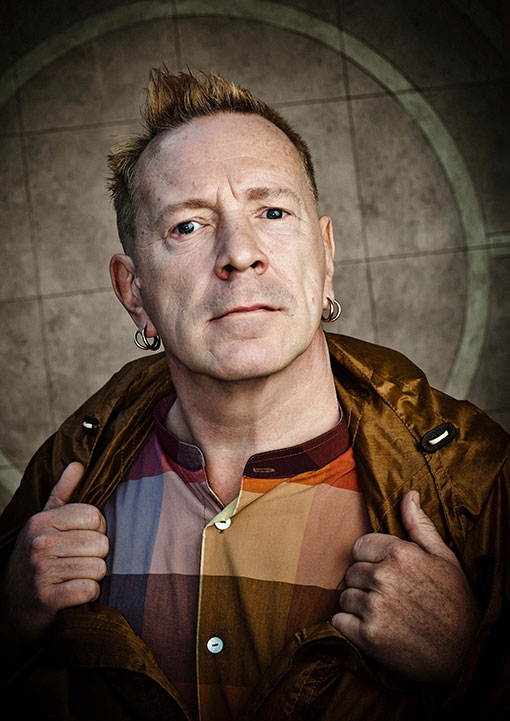 Born to Irish parents, and the eldest of three brothers, John Lydon grew up in Holloway, North London – present site of the Arsenal Stadium – in a small flat where his family shared an outdoor toilet with the public. John and family later moved to a council flat in Finsbury Park when he was around 11 years old.

Aged seven he contracted a serious bout of meningitis which put him in and out of coma’s for almost a year. Wiping most of his early memories and affecting his eyesight. On returning to school he was painfully shy and labeled a “dummy”. The experience only made him stronger and more determined.

Before John could complete his O Levels he was expelled from Catholic secondary school for daring to question teachers and refusing to toe the line. He attended Hackney & Stoke Newington College of Further Education, then later Kingsway College, to finish his exams. Where he met Sid Vicious.

It is a well-worn story that John was spotted wearing a “I Hate Pink Floyd” t-shirt and invited to audition as singer for a fledgling band that had been pestering Malcolm McLaren to manage them. If John had not joined the band that would later become the Sex Pistols, back in 1975 they would have been a very, very different band. Things just wouldn’t be the same at all…

Although John had no previous musical experience, less than six months later the Sex Pistols made their live debut at St Martins College of Art, November 6th 1975.

On account of his decaying teeth John was re-christened “Johnny Rotten”. His scintillating vocal delivery and forthright lyrics – matched with the band’s power and energy – soon saw the Pistols build up a word-of-mouth following. Despite John vehemently rejecting the term, the Sex Pistols found themselves at the forefront of what would later become known as “Punk”.

While appearing on The ‘Today’ TV show in December 1976 John was goaded into swearing by presenter Bill Grundy. Not for the first or last time, John didn’t back down.

After signing to Virgin Records in 1977 (their third label in less than nine months) the Pistols released John’s alternative National Anthem ‘God Save The Queen’ during the Queen’s Silver Jubilee celebrations. John was attacked in the street and slashed several times.

When the Sex Pistols split in January 1978 John quickly moved onto Public Image Limited (PiL). McLaren tried to legally prevent him using the name “Rotten” (which he later won back) – but regardless – this was a new beginning. Lydon’s unique vocal style and perceptive lyrics remained, however, PiL were nothing like the Sex Pistols.

PiL went onto blend a variety of different musical styles; there were no rules. The change of direction would frustrate many Sex Pistols fans, but equally open up a variety of people to more eclectic tastes. PiL continued in one form or another through three decades, releasing numerous albums, and scoring some unlikely hits along the way. Always chameleons, bar Lydon, the line-up would constantly change; as would the style and content of the music.

Outside of PiL John has released several solo collaborations; most notably the groundbreaking rock/rap crossover ‘World Destruction’ with Africa Bambaataa in 1984, and the pioneering ‘Open Up’ with dance duo Leftfield in 1993.

In more recent years John has brought quality TV to the masses. He launched his own ‘Rotten TV’ for VH1 in 2000, and made a show-stealing appearance on the 2005 ITV reality show ‘I’m a Celebrity Get Me Out Of Here’ and proudly represented Country Life Butter.

He fronted the series ‘John Lydon’s Megabugs’ for Discovery Channel in 2005/6; and two nature specials for Channel 5: ‘John Lydon’s Shark Attack’ and ‘John Lydon Goes Ape’. Over the years he has made various travel, nature, music and documentary shows for networks in the UK, Europe and USA. He has also appeared in films such as ‘Order of Death’ with Harvey Keitel. And hosted his own radio series’ ‘Rotten Day’ and ‘Rotten Radio’.

After a drawn-out legal case against Malcolm McLaren, 1986 rightfully saw John reclaim the name “Rotten” and win a deal which gave control of the Sex Pistols assets back to the band themselves. He went onto publish his best-selling autobiography ‘Rotten: No Irish, No Blacks, No Dogs’ in 1994 which mainly focused on Sex Pistols. The book featured contributions from Paul Cook and Steve Jones; together with various friends, family and associates including John Rambo Stevens, Julien Temple, Chrissy Hynde, Billy Idol, and many more…

The autobiography would help prompt a change of heart. Since 1978 – despite countless offers – John always said he would never reunite with the Sex Pistols. However, after meeting on their own terms the original Sex Pistols – Lydon, Jones, Cook and Matlock – decided to return for the hugely successful ‘Filthy Lucre World Tour’ in 1996.

John enjoyed playing with the Pistols so much he was tempted to return several times. And while he acknowledges the Pistols are a big part of his life it’s worth remembering that the majority of his career has been spent separate to the Sex Pistols. As he has commented, his body and mind is the Sex Pistols but his heart and soul is PiL.

With PiL on temporary hiatus after 1992 John continued to make his own records. “Solo” records in the real sense. He played, wrote and produced his first solo album ‘Psycho’s Path’ in 1997.

December 2009 saw the long awaited return of Public Image Limited (PiL) for 7 monumental live dates in the UK. Their first shows in 17 years. The band have toured worldwide ever since. 2012 saw them release the critically acclaimed studio album ‘This is PiL’. The album was self-funded and released on their own PiL Official Ltd label.

‘Anger is an Energy: My Life Uncensored’ was published in 2014 and was John’s first complete autobiography covering his life from childhood through to the present day taking in Sex Pistols and Public Image Ltd, along with his TV and media work.

PiL documentary ‘The Public Image is Rotten’ was released in 2018 and is available to stream worldwide on various platforms. In 2020 John also published ‘I Could be Wrong, I could be Right’, featuring John’s random thoughts about the way he sees life, along with anecdotes from his unique and extraordinary career.

John lives in LA with Nora. Mrs Rotten for over 40 years. 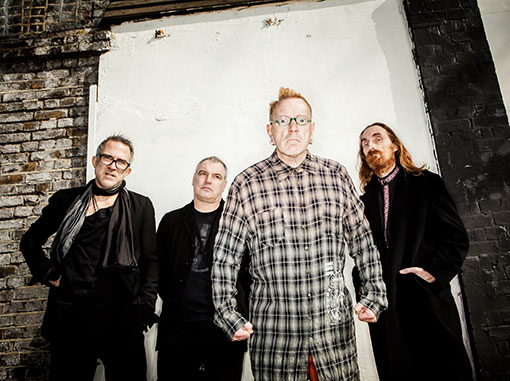 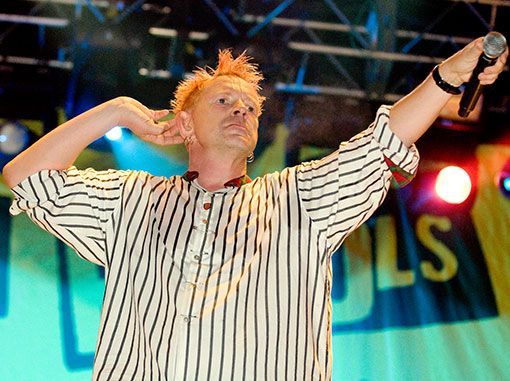